Evita Tezeno
Will I Be Here For My Future, 2020
Acrylic and mixed media collage on ragboard
​40 x 30 in.

Evita Tezeno
The Soul Knows My Silence, 2020
Acrylic and mixed media collage on ragboard
​40 x 29 in.

"This world is so dark and so dreary sometimes. We have so many misfortunes in our lives. I create a small oasis amidst a storm to combat all the negative things that go on in our lives."

Luis De Jesus Los Angeles is very pleased to announce EVITA TEZENO: BETTER DAYS, on view from March 6 through April 17, 2021. Better Days marks Tezeno’s first solo exhibition in Los Angeles. An opening reception will be held on Saturday, March 6 , from 12:00 pm to 6:00 pm. Visitors are encouraged to make an appointment at www.luisdejesus.com/contact.

Employing richly patterned hand-painted papers and found objects in a contemporary folk-art style, Evita Tezeno's colorful collage paintings on canvas and rag board depict a cast of characters in harmonious everyday scenes. Inspired by her family and friends, childhood memories in South Texas, personal dreams and moments from her adult life—and influenced by the great 20th century modernists Romare Bearden, Elizabeth Catlett, and William H. Johnson—scenes of joy animate her vision of a Black America filled with humanity.

The theme of timelessness emerges—a carefree life, united and strengthened by love, tradition, and spirituality evoking the past in portraits that are both idealized and hopeful. Evita Tezeno's work is a powerful affirmation of African American life. Characterized by its simplicity and whimsy, it reflects a strength of character developed in centuries-old rituals and customs, such as storytelling, spirtuals, gospel music and the blues. Her vision can be understood as an act of self-definition that allows the black tradtion to speak for itself.

Tezeno’s creative process begins with sketches and lush textures and patterns painted onto paper using acrylic paint, watercolor, crayon, and various other mediums and techniques. She traces and cuts out shapes and arranges them to form the face and various parts of the figure, the clothing, and the landscape elements in the background. The works in Better Days portray intimate moments: couples holding hands in silence or singing a song, or snapshots of everyday scenes, such as friends waiting at a bus stop or enjoying a walk under a bright midday sun. Devoid of pain, her characters are filled with a sense of nobility and tenderness.

Evita Tezeno (b. 1960) is a Port Arthur, Texas native, and graduate of Lamar University. She lives and works in Dallas and is a mentor to young women. Her work has been acquired by prominent collectors,entertainers, media personalities and athletes, including Samuel L. Jackson, David Hoberman, Denzel Washington, Star Jones, and Susan Taylor, among others. In addition, her work is included in the permanent collection of the African American Museum of Dallas and the U.S. Embassy of Madagascar. Tezeno has been awarded commissions by the Essence Music Festival in New Orleans, The Deep Ellum Film Festival in Dallas, and the legendary New Orleans Jazz & Heritage Festival ("Jazz Fest"), where in 1999 she became the first female artist to design its celebrated poster. As the recipient of the prestigious Elizabeth Catlett Award for The New Power Generation, Evita Tezeno has built a career as an acclaimed multi-disciplinary female artist. 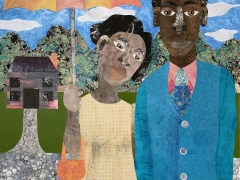 Employing richly patterned hand-painted papers and found objects in a contemporary folk-art style, Evita Tezeno’s colorful collage paintings on canvas and rag board depict a cast of characters in harmonious everyday scenes. Inspired by her family and friends, childhood memories in South Texas, personal dreams and moments from her adult life—and influenced by the great 20th century modernists Romare Bearden, Elizabeth Catlett, and William H. Johnson—scenes of joy animate her vision of a Black America filled with humanity.

Texas native Evita Tezeno is known for her whimsical collages that capture the beauty and joy of day to day experiences. Her mixed media depictions of Black women, men, and children are inspired by moments from her own life as well as children’s stories. Through her work, Evita seeks to inspire the viewer and bring laughter to the lives of others.

Evita Tezeno seeks the pleasures of life through the eyes of visual expression. Her exuberant passion for life leads her to explore the human experiences related to her childhood memories and life’s encounters. Using bright colors soft hues, and bold figures, Tezeno crafted visual stories, by the use of hand made papers, crayons and other mediums, that evoke smiles, joy and thoughts of yesteryears.”

Talking with Evita Tezeno feels like the first day of spring after a long, dismal winter. Even though she’s been earning a living through her art since the 80s, she talks about her life, her journey, and her art with the enthusiasm and excitement of a new artist fresh on the scene. Her calm energy and smooth storytelling make an interview feel like a conversation between friends.

View BlackArtinAmerica.com
Back To Top