Tijuanerias simply refers to anything having to do with the city of Tijuana. Since the 1920's, Tijuana has been marked as a symbol of perversion and vice, a stigma that continues to define the violence and social upheaval of this border city.  Hugo Crosthwaite will interpret Tijuana's mythical leyenda negra, or "Black Legend,” in a presentation of 100 ink and wash drawings as well as an installation environment comprised of an 80 foot circumferential mural presenting large-scale works in charcoal, graphite and ink on archival rag board. Allowing the act of drawing to organically dictate his compositions, Crosthwaite juxtaposes a wide range of textural and tonal ranges against spaces that alternate from dense and atmospheric to flat and graphic.

Tijuanerias depicts dark figures in dark places: madmen, prostitutes, drug violence, murder, the powerful and the excesses of narco wealth.  Mixed with these foibles and idiosyncrasies are people that appear to be always in transition, crossing or waiting to cross a socio-political and economic border to perceived greener pastures.  Incorporated in the mythology of this baroque environment and visual chaos are angels, demons, and spirits.  These drawings are satirical fantasies: Tijuana as a place of purgatory. Horribly real, humorously weird and often bizarre, there is complicity and an acceptance that one can grow accustomed to as long as there is a deal to make and money to be made.

Tijuaneriaspays homage to Goya's Caprichos with its depiction of grotesque figures and themes executed in an informal, sketch-like style.  Crosthwaite’s work describes an existing dichotomy in Tijuana: a place of fetishes, cartoons, comics and graffiti scribbles alongside a threatening and deeply ingrained rationality which is governed by money, political interest and empty gestures of civility.  His figures—the everyday men, women and children that populate his native city—are presented in a non-idealized documentary style that allows them to appear in their humble familiarity and authenticity.

Crosthwaite alternates between mythological subjects and contemporary ones, often combining the two. Francisco Goya, Eugene Delacroix, Theodore Gericault, Gustave Doré, Jose Guadalupe Posada, and Arnold Böcklin are among the many artists that have inspired his work. He also includes an exploration of modern abstraction in his compositions, which he approaches in a totally improvisational manner. The joining of abstraction with classically-rendered imagery creates a feeling of spontaneity and vagueness; each work becomes an enfoldment of personal vision in which reality, history, and mythology collide as he explores the complexities of human expression – everything from alienation to acceptance and even celebration.

Hugo Crosthwaite’s recently completed epic mural “Death March”, measuring 10 by 25 feet, was commissioned for Morbid Curiosity: The Richard Harris Collection, and is on view at the Chicago Cultural Center from February 27 through July 8, 2012.  He is also featured in the book NAKED: The Nude in America, by Bram Dijkstra and published by Rizzoli, New York. 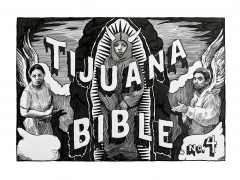 Hugo Crosthwaite
Back To Top