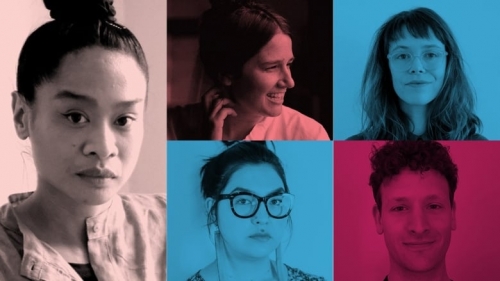 Nicolas Grenier says he mostly works with paintings, but also installations, videos, readings, performances, think tanks, participative workshops and new formats examining socio-economic dynamics. He considers painting an "interesting medium" adding that it's old and traditional with inherent qualities that keep it grounded. "It is the most primary visual language, pigments on a flat surface, and to me it acts as a constant reminder of the temporality and physicality of our bodies," he said. "By contrast, the types of socio-political power dynamics that I often explore are rather intangible, diffused and abstract."

Whether his work is a painting or lecture, Grenier says it's always based on research. Recently, he was particularly involved with research on economic structures.He adds that he can't ignore that paintings are "limited by the problematic economy in which they exist."

"Whatever income I will get from sales will be used to finance the long-term development of non-monetary economic systems that I am working on," he said. "I try to create an ecosystem in which both the artistic and the political dimensions of practice can respond to each other."

He said that he has been trying to recalibrate where he goes with his work.

"I've been trying to construct new structures that are experiments in and of themselves on how an economy could be run, on how a social group could form, on how collaboration could exist between scientists, artists and economists."

View CBC.ca
Back To Top