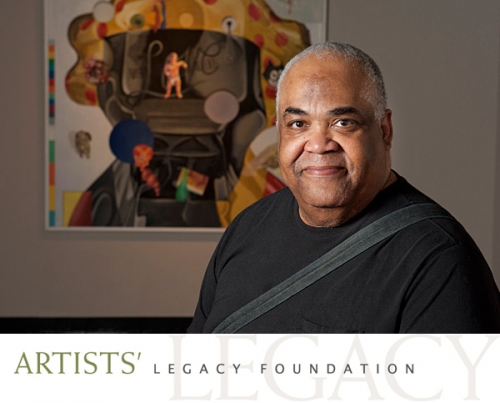 The Artist Award is an unrestricted merit award of $25,000 given annually to a painter or sculptor who has made significant contributions to their field and whose work shows evidence of the hand.

“I am deeply honored to be a recipient of this distinguished award,” says Williams. “It is the validation of 40 years of work, representing People of Color in my art. My interest in Black culture stretches back to Africa and its culture, and to Afro-futurism in my latest body of work.”

For more than four decades, Peter Williams has created artworks that explore contemporary culture, racism, police brutality, incarceration, environmentalism, and voyeurism through an approachable visual style. His paintings encourage the viewer to look deeply at the canvas for clues and insight about the Black experience. For example, pattern and distortion represent the conditions and circumstances that disrupt Black lives. Defying categorization, his painting style incorporates varying levels of abstraction, figuration, narrative, and iconographic elements. He draws inspiration from posters, comics, and the vibrant colors of city life.

“Most people don’t have any kind of dialogue with the work of 500 years ago or even 100 years ago. So, I’m trying to talk in the language that’s available to most people. We live in a comic universe right now. I’m trying to be subversive by saying underneath all this humor is something we’d better start paying attention to. And I’m using the signs and symbols and signifiers that I learned from the Western tradition of oil painting,” notes Williams.

Williams’ recent series include Afro-futurist narratives about a superhero named “The N Word” as well as a group of African American colonists who leave Earth due to impending environmental catastrophe. In both, Williams uses dazzling patterns and imagery to guide the viewer on a journey rife with art historical and pop culture references, satire, and creativity. Paintings from the Black Exodus series are now on view in a three-venue exhibition at Luis De Jesus Los Angeles, Museum of Contemporary Art Detroit, and Trinosophes (Detroit).

Williams’ earlier paintings include images of Aunt Jemima, Mickey Mouse, and SpongeBob SquarePants as a way of talking about racial stereotypes and their effect on American culture. His experiences in the Southwest, where he studied at the University of New Mexico in Albuquerque in the early 1970s, inspired a series of paintings about Black cowboys.

Throughout his career, Williams has created work that reflects a deep understanding of art history. Recent paintings reference abstraction, minimalism, and pointillism, while older works use classical painting compositions as allegorical framing devices. Williams’ paintings have been linked to the works of Romare Bearden, Jacob Lawrence, Jean-Antoine Watteau, and Pablo Picasso, among others.

Williams has taught at universities since 1989 and influenced generations of artists as a teacher and mentor. He was an associate professor at Wayne State University in Detroit for 17 years before accepting a position as a senior professor of painting at the University of Delaware in Wilmington, where he recently retired after 15 years.

“Peter Williams is a unique and unpredictable voice on the scene, states Eve Aschheim. “He is one of the most poignant artists of our time to address themes of race and politics, and his raw, edgy work risks making the viewer uncomfortable, and resists assimilation into the decorum of the art world. His outstanding paintings transcend categories, as he forges realism, fantasy, cartooning, bold color, symbols, personal iconography, humor, and the news to unforgettable effect.”

Dennis Elliott comments, “There are many entrées into Peter Williams’ painting: abstraction, figuration, cartooning, humor, and political commentary…specifically, escalating outrage of Black suppression. His 40 years (in partial obscurity) honing his skills of paint application and the evolution of his palette enabled the power of his many-faceted content. A national award is well deserved and long overdue.

“It is gratifying to honor the work of artists like Peter Williams, says Valerie Cassel Oliver.  “Peter has remained steadfast to his practice as both a painter and an educator. His work has continued to evolve with all the potency and brilliance that one would expect given his longevity in the field. It is a much-deserved acknowledgment of his artistic virtuosity!”

The Artists’ Legacy Foundation will be hosting an online program on November 13, which will feature a conversation between Williams and Jordana Moore Saggese, associate professor of American art at the University of Maryland. Please visit www.artistslegacyfoundation.org for information on the public program.

For more than 45 years, Peter Williams has chronicled current and historical events, interspersing pictorial narratives with personal anecdotes and fictional characters in order to create paintings about the diverse experiences of Black Americans. With boldness and humor, he tackles the darkest of subjects including, but not limited to, police brutality, lynching, slavery, mass incarceration, and other realms of racial oppression. Williams uses cultural criticism to form new creation myths, retelling the history of America from fresh and cosmic perspectives.

Peter Williams: Black Universe, a three-venue exhibition, is on view through October 10, 2020 at Luis De Jesus Los Angeles, and through January 2021 at the Museum of Contemporary Art Detroit and Trinosophes in Detroit.

About the Artist Award

The Artist Award was launched in 2007 to recognize and honor outstanding visual artists whose primary medium is painting or sculpture. Each year, ten artists are nominated by a selected group of anonymous arts professionals and reviewed by a three-member jury of peers. Since its inception, the Foundation has distributed over $325,000.

To learn more about the Artist Award and its impact on recipients, watch this video: https://vimeo.com/187242534

To learn more about Peter Williams, watch this video: https://www.luisdejesus.com/features/peter-williams-interview-with-the-delaware-art-museum

Artists’ Legacy Foundation stewards the work of Legacy Artists and facilitates their posthumous philanthropy; recognizes outstanding painters and sculptors through awards and grants; and serves as an educational resource for artists, scholars, and the general public.  For more information, please visit artistslegacyfoundation.org, or on Twitter (@Artists_Legacy) and Instagram (@artistslegacyfoundation).

For inquiries about Peter Williams and his work, please contact Luis De Jesus Los Angeles at 310-838-6000, or email gallery@luisdejesus.com