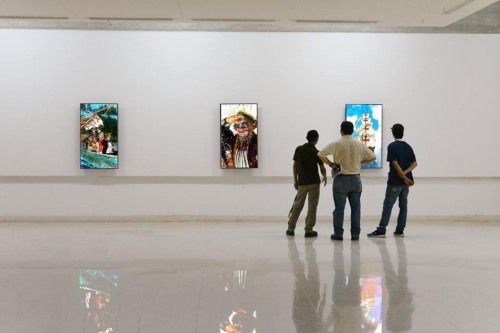 COUNTERFEIT HEROES is comprised of a select group of Solmi’s videos, including The Brotherhood (2015)—a hallucinatory masquerade of current and historic icons, both the feared and the revered. ‎Their festive celebration devolves into a decadent nightmare.

Solmi deploys his signature visual chaos to satirize the self-absorption of celebrity culture and to alert viewers to question how their complacency perpetuates the mythologies that cloak such personalities.

Also on view, Chinese Democracy and the Last Day on Earth (2013) will be screened in Maczul’s Multimedia Room. This trilogy lampoons contemporary society and the self-destructive nature of humankind.

In contrast with their playfully faux-naïve aesthetics, the videos point to a worldwide malaise driven by authoritarian, macho hierarchies. They suggest a poisonous dynamic controlled by vicious politicians, corrupt businesspersons, and ruthless corporations, who operate without regard to common folk and civil society.