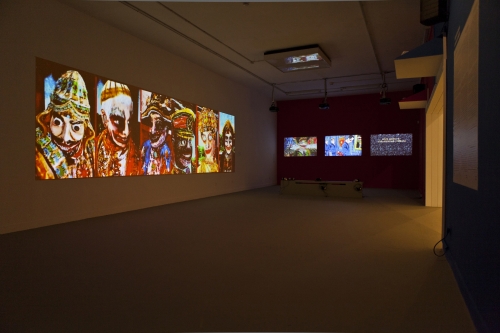 Modernism, in its various periods and in its aspiration to liberate the means of artistic expression from their dependence on external reality, was often characterized by a poignant use of colour. The technological age has turned colour into the commercial product of a mass, uniform assembly line.

Frank Stella stated his desire to use paint "straight out of the can – it can't get better than that." Technological development has brought about far-reaching changes in the artist's self­ perception, in his understanding of the essence of his practice and creative work. These changes are the focus of the new cluster of exhibitions. The cluster addresses the period from the 1950s until the present day, with an emphasis on the Pop and Op Art movements and their successors.

In 1963 Andy Warhol proclaimed, "I want to be a machine," thereby noting the loss of authenticity in contemporary culture, and with it, the loss of legitimacy of the artist's emotional expression. The discussion of the representation of the real, the original, and the beautiful, and of the lack of authenticity in the technological age – from modernism until today – is the subject of this exhibition cluster. This subject is explored in relation to the way in which the technological and digital age has turned color into a mass uniform commercial product, in which there is no more room for individual, unique expression. The word "authenticity" was a key concept in modernism and the modernist avant­garde, whereas the rise of post-modernism introduced the opposite message, of fiction and illusion. New media technologies have created a situation in which human society replaces reality with its simulation, using signs, symbols, and a great multitude of visual means.

The exhibition "Optical Art (Op Art)" follows the early attempts of modernist art to explore the ways in which the viewer perceives visual images in the modern period. Beginning with the works of Laszlo Moholy-Nagy and Joseph Albers and up to Victor Vasarely and Bridget Reily, the Op Art movement has explored the dimension of illusion and uncertainty of the seen. The works of Op artists gained wide popularity and commercial success particularly in the 1960s.

The exhibition "The Pop Experience and Israeli Art" follows the introduction of American Pop values into the field of Israeli art, and the widespread use of collage techniques, which blur the difference between high art and popular culture. The exhibition addresses the beginning of this revolution in Israeli art, in the 1960s, when young artists began to incorporate images taken from the various media in their works.

A series of one­man shows by contemporary artists examines the ways these artists address the artificial, manipulative image characteristic of Pop art. Over the past two decades, the traditional role of the painting canvas has been usurped by new, unexpected raw materials – action, sound, movement, and light. Technological development, particularly of the digital media, has brought about far­-reaching changes in the artist's perception of himself and his work. The works of the participating artists present the domination of daily reality by external visibility, making it a consumer product composed of disintegrated signs. The series of one-man shows includes the following artists: Jenifer Bar Lev, Sergio Segre, Eran Shakine, Eliezer Sonnenschein, Gary Goldstein, Ayelet Carmi, Ido Shemi, David Tartakover, Guy Yanai, Pnina Reichman, Osvaldo Romberg, and Federico Solmi.

Installation image of Federico Solmi: Chinese Democracy and the Last Day on Earth