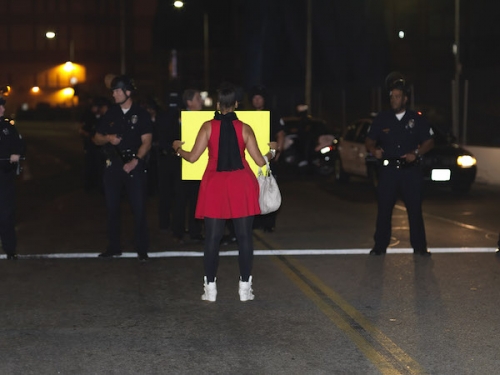 “The Democracy Project: 2020” manifests the great, besieged “project of Democracy” as an online exhibition for Artillery’s September/October issue, featuring recent work by a diverse selection of the West Coast’s most compelling artists. Whether approaching the theme ironically, or with reverence (or a bit of both), the artists below are chosen for their political engagement, provocative content, and significant contributions to the diversity of the art world.

Though the word democracy in this moment connotes for many a political party or side, the term also reflects a process. Democracy is a practice, a set of decisions that vacillates permanently between our light and darkness.

The state of the pandemic left me and many artists included in “Democracy 2020” at a new point of reflection. Months of time reluctantly passing in our homes, we were left living together separately to ask new questions. What side of history are we really on? What happens when protest becomes the only space to commune?

"The photograph was taken in Los Angeles during the protests and marches that took place in the days following the Grand Jury’s decision not to indict Darren Wilson, the white police officer involved in the shooting death of Michael Brown, the unarmed black teen that became a focal point for many in the Black Lives Matter movement which has since grown to become a truly global movement."