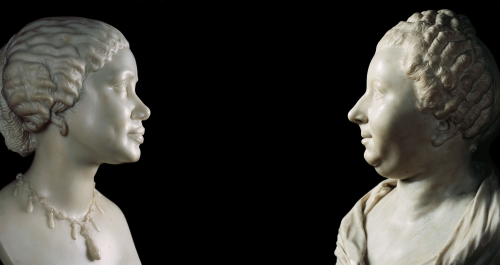 The Public Art Series continues with Mexican-American artist Ken Gonzales-Day, whose work illuminates how difference, otherness, and identity emerge through acts of seeing. His photographs of historical artifacts — ranging from archival postcards to marble busts — reveal the constructedness of racial categories and hierarchies alike. Using digital editing software, he experiments with absence, juxtaposition, and context in order to expose how we have been taught to see. On view at Playwrights Horizons, his Profiled project places sculptures of human figures from Asia, Colombia, Japan, Mexico, Northern Europe, Singapore, and the United States in unexpected encounters with one another — not unlike many characters from many plays sharing a single stage. These likenesses reveal a stunning range of ideas of beauty and imaginaries of race, inviting us to reckon with our definitions and representations of both, from wherever we stand as the viewer (or sit in the audience).