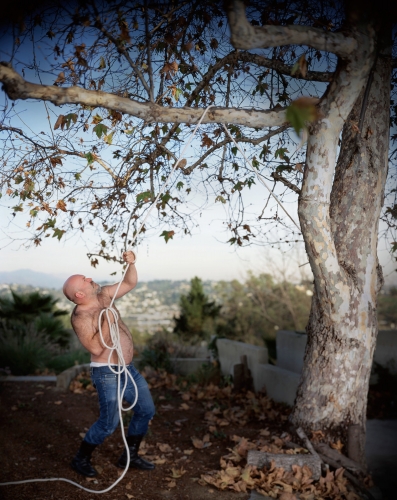 The Spread, which explores themes of civil war, protest, cultural and racial insurgency, climate change and sanctioned travel will follow a similar logic to Verabioff’s installations to disrupt the authority associated with authorship by acknowledging the complex interplay between object, creator, viewing context and audience through the lens of queer feminist discourse.

Nikita Gale​'s practice is often structured by long-term obsessions with specific objects and the ways these objects gesture towards particular social and political histories. For this exhibition Gale's signature barricade sculptures straddle ​Mark Verabioff​’s 'fascist bros.' A picture by ​Walead Beshty of himself absurdly inserted into display architecture takes on new meaning today with the crusade of gouty Anti-maskers to 'Party America' while others have their heads in the sand. ​Ken Gonzales-Day took his contribution and participation within the context of this group exhibition as both experimental and site-specific to show a photograph that's never been given the opportunity to be publicly on display. ​Eve Fowler​'s text-based paintings of comfort and love perpetuate 'the difference is spreading.' The bronze bathing suit sculptures of ​Alika Cooper have resemblance of being peeled off the body and flung to the floor. In the context of this exhibition Cooper's work alludes the fantasy denial of sanctioned travel. ​Eric Wesley​'s mood is just simply 'fuck it' which feels a kinship with ​Terence Koh​'s art/life drawings of retraction from the cruel world to go back into his mother's womb.

Giving agency and disrupting the ambiguous authority of artist-as-curator, Verabioff extends the authority of meaning to artists participating in his exhibition by providing a platform for them to speak about their work in their own words:

This was one of several photographs I took of the Canadian-born artist, Mark Verabioff in a staged reenactment of a lynching from California history. The image was shot on 8 x 10 inch sheet film with an old-fashioned wooden Deardorff camera that I bought on eBay.

This photograph came out of my research into the history of lynching in California and enacts the performative queer body, as part of what must be seen as a critical response to the image of whiteness. The image of whiteness was constructed and maintained through systemic reinforcement, and was clearly linked to the image of lynching and the spectacle of mass killings that took place across the Nation and resulted in the lynching deaths of over 4000 blacks, 500 Latinxs, and untold numbers of Native Americans and POC in this Nation’s history. The photograph was shot prior to the publication of my first monograph, Lynching in the West:1850-1935 (2006), which brought National attention to the lynching of Asians, blacks, Latinos, Native Americans, and others, in California.

This is the first time the photograph has been exhibited.